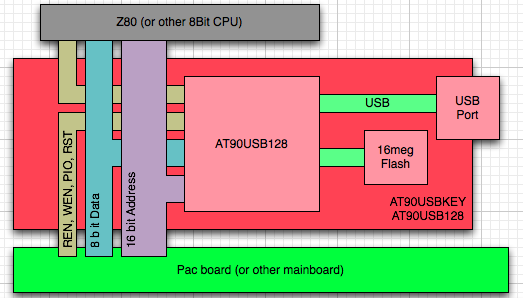 When developing for classic arcade hardware (Pac-Man in my case), the process of trying out your program code on the target hardware is tedious and long. To do so, you need to:

It's only at this point, perhaps 15 minutes from step 1 that you know if your build worked. Granted you can have a second set of EPROMS that are ready, to minimize the wait. You can also do a lot of testing on an emulator before you get to this point.

The problem is that this is very time consuming, cumbersome, and puts a lot of stress on the EPROM chips themselves which may fail after many re-uses, or pins may break when removing/inserting them. There's also the possibility that these 25+ year old arcade boards may fail as well with this kind of use.

My solution to this problem is a board with USB capabilities that you plug into the arcade board (the "target"). You pull the Z80 CPU, plug in this board, then plug the Z80 CPU into this board.

This board has flash memory on it to hold at least one ROMset. It also has a chunk of RAM, into which a stored or live ROMset can be loaded into. It also has the capability of resetting the Z80 CPU, and can listen to commands from the Z80 CPU.

So the idea is this;

This all can happen directly from the build tool, almost instantaneously, without any external physical interaction by the engineer.

The current design I've been working on for this has a few components on the USB board.

The AT90 will initialize in one of two modes; USB-Control or Standalone.

In this mode, all interactions with the target CPU, RAM buffer, etc are handled by the USB host computer.

This is the primary mode for the development testing environment.

This is also the primary mode when the device is being programmed for standalone use.

The flash on the system is capable of storing multiple complete ROMsets. In standalone mode, a pre-determined initial ROMset is installed into the RAM buffer, and the target CPU reset immediately on startup.

The target CPU can then, via Port IO, tell the CPLD a different bank to switch to (as well as other commands). The AT90 will see these commands set in the CPLD's registers, and reload the appropriate ROMset image into the RAM buffer, and reset the Z80 CPU.

In this mode, the boardset is effectively a "multigame" system. The initial ROMset can be a menu system that lets the user select other ROMsets to load.