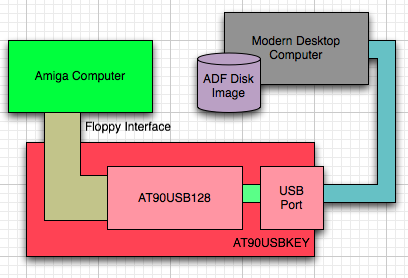 A basic hardware device with USB on the host side, and Amiga Floppy port on the other side. It allows for the Amiga to read/write "disks" which are actually just disk images on the host computer.

This will allow for the Amiga to easily make backups of Amiga disks (via a disk copy utility), generate real floppies from disk images (again, via a disk copy program) or just load/save files from the Amiga directly to the synthesized floppy disk on the host.

The device plugs into an external floppy drive port of the target machine. The Amiga thinks that it is just another floppy drive. The device will signal to the Amiga when a floppy disk has been inserted (via commands on the host computer). It then will be able to read/write the data directly to the ADF file on the host.

The basic idea is that, based on a USB enabled hardware device, such as the Atmel AT90USBKEY, it would appear on the host computer as a generic USB device of some kind. A host application would be run that attaches to a disk image (ADF) that could then be read-to/written from the target machine.

The host software will at first be a command line utility that will load into a buffer the disk image, or create a new blank disk image.

There may be a Java/Swing GUI front-end for this as well that lets you manage your disk images, and easily allows you to insert/remove disks.